Our winter issue features 2019 Constance Rooke Creative Nonfiction Prize winner Jeanette Lynes, who suffers under a tyrannical “Bat Reign” in her memoir. Carolyn Nakagawa likens beauty to “fermenting fruit” in “Peacock.” Julia Brush speaks in riddles in “Oracular.” Angélique Lalonde searches for a stronger bond in “Crazy Glue,” while Franco Cortese’s work, two poems “From lipodrome,” stand in reflection of each other. “[N]o hour will be like any other” in Kurt Marti’s “but someday,” translated from the Bernese Swiss German by Jeff Kochan. Patricia Young takes us back to the 60s in “The Single Blow.” “Miss Sarssa’a” sees Sherine Elbanhawy finding her voice, while Suphil Lee Park is eaten raw in “After Her Mother’s Funeral Mother Calls Me into the Kitchen.” We view Emeka Patrick Nome’s mother through three lenses: “Monologue on the Bank of an Ocean with Osun in which My Mother Asks the Goddess for a Child,” “Monologue in an Unlit Room with the Ghost of My Dead Mother,” and “Monologue in a Room in which My Mother’s Ghost Denies Being a Reincarnate of the Prophet Ezekiel.” The wind is “out of breath” in Hasan Alizadeh’s “Good Faith,” translated from the Persian by Rebecca Ruth Gould and Kayvan Tahmasebian. Conor Kerr thinks back to “The Last Big Dance,” while Joel Robert Ferguson shares “The News.” Melanie Boyd imagines “Birthday shopping for an addict,” and Bernadette White thinks about dinner as a distraction in “Teriyaki Tuesdays.” Dominique Béchard’s poem, “Listening to Haydn on the Garden State Parkway” begins, “Without a thought of you, a week has gone by.” Meanwhile, Jon Gingerich forgets something vital in “Antibiotics.” Tatiana Oroño observes a “Still Life with Defeats,” translated from the Spanish by Jesse Lee Kercheval. Robert Hilles slows down in “Delayed Neutrons,” and Kulbir Saran lights up in “bottle rocket.” “[T]eeth are made of fish,” begins Sarah Yi-Mei Tsiang’s “Spawning Grounds,” while “Chinook fingerlings tumble out of their nets” in Dawn Lo’s “Life Cycles,” and in Sehrish Ranjha’s story, “Zubaida,” the character “is determined not to be caught like a fish.”

Stay warm by the fire with reviews of books by Shannon Webb-Campbell (I Am a Body of Land reviewed by Cara-Lyn Morgan), Ken Victor (We Were Like Everyone Else reviewed by Joseph LaBine), Elise Levine (This Wicked Tongue reviewed by Kate Kennedy), Simon Brousseau (Synapses, translated by Pablo Strauss, reviewed by Ian MacLean), and more!

Please be aware that our digital edition is now offered only in a non-printing PDF format. 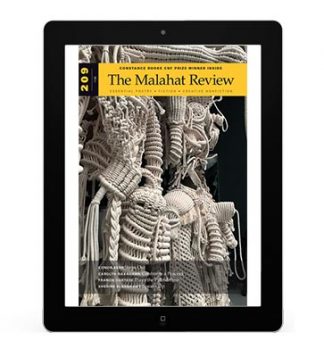