The bulk of Issue #10 is another masterful installment of “An Atlas of Poetry.”  This feature also appeared in Issue #6 and showcases poetry from around the globe.  Notable contributors to this section include U.S. poet Donald Hall, Manuel Bandeira, a celebrated Brazilian poet; George Jonas, a Canadian writer from Budapest; Lucretius, a Roman poet and philosopher; and Christopher Levenson, one of the founders of Arc Poetry Magazine.

The short fiction in this issue is truly delightful.  The three stories are relatively compact with highly memorable characters so that plot acts as a picture frame for these expressive character sketches.  Jack Matthews depicts a strange meeting between a countess and a young man in “The Betrayal.”  An elderly woman resents the way old age changes how people treat her in Dal Treit’s “Crow in the High Woods.” Dan Davin looks through the mischievous lens of childhood in “Roof of the World.” Finally, a divorced couple has a brief encounter in “The Old Wife” by Nancy A. J. Potter.

Also of interest is “Literary London of the Thirties,”an excerpt from an (as of then) unpublished autobiography by Robert Speaight. He leads us through Lady Ottoline Morrell’s sitting room where we encounter Yeats and Eliot among other great writers, artists, and intellectuals who brushed elbows there. Of Yeats and Eliot, however, Speaight observes: “Where Yeats made sure that you would not mistake him for anyone but himself or for anything but a poet, Eliot seemed in search of anonymity.” 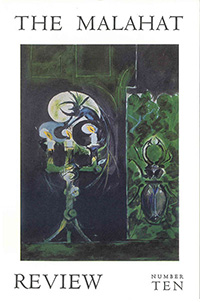