This issue is notable for its many contributors who went on to win a Governor General’s Award later in their careers. Roo Borson, who won the GG in 2004, has four poems in this issue including tributes to Robert Gray and George Bowering. Greg Hollingshead’s “Rose Cottage,” first published here, went on to be part of his short story collection The Roaring Girl, which won the Governor General’s Award for fiction in 1995. This story follows protagonist Alex’s time living in a small rural cottage on Vancouver Island and his sporadic but meaningful walks with the elderly woman who lives next door. As Alex becomes closer with the woman, he becomes privy to the abuse she suffers at the hand of her caretaker, and struggles with his role and responsibilities as a bystander.

This issue opens with two flash fiction pieces by Stephen Schecter, one based on the issue’s cover painting by Susan Erony, and one, titled “My Daughter,” in which the protagonist explores the true meaning of faith on a shopping trip with his children. These are followed with a poem by Tim Lilburn, another Governor General’s Award winner (2003), who meditates on nature, the act of seeing, and the significance of coyote droppings in “Contemplatio.”

The reviews section is rather unusual because it is mostly taken up by award-winning poet and University of Victoria alumna Sujata Bhatt’s impressive review of ten different books, including Erin Moure’s Sheepish Beauty, Civilian Love, and Carol Shields’s Coming to Canada.

The final poem, Roger Nash’s “Preparations for a Journey,” bids the reader goodbye and gives advice for the journey ahead: “Give up your seat on an empty / tramcar. Kiss someone on lips / formed around a foreign language. Open / your windows. Break all the locks.” 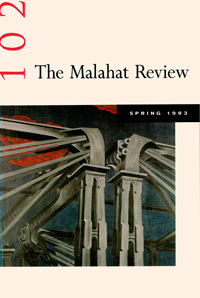