This issue marks the start of Derk Wynand’s editorship, though he notes that all the material within was chosen by Constance Rooke and her editorial board. The issue is filled with exceptional writing—the two winning entries in the 1992 Long Poem Prize, and some fantastic pieces of short fiction. The poetry winners, D’arcy Randall and Marjorie Stelmach, each offer work to get lost in, poems that present an entrance into a complex new world. In Randall’s piece, “Portraits of Mary Cassatt,” the painter’s life is imagined in brief scenes, some of which are titled as though they are companions to her individual artworks. We see Cassatt as a child, developing her style, and through the eyes of Degas. Moving through these scenes, the figure of Mary is shaped and revealed bit by bit; we can see this image of process in a scene where Mary bathes: “the water takes / her body. She feels its laps apply / more colour: saffron, peach, a touch / of umber.” Each section of the poem works towards creating a complete picture, just like brush strokes on a canvas.

Stelmach’s “Doorways” deals with movement between spaces, entryways and borders and shifts from one state or place to another. Different kinds of passage are alluded to – between seasons, between rooms, between life and death. “The danger in doorways: / they imply a room / beyond,” she writes; the poem lingers on this idea of thresholds, the process of becoming imagined as a physical movement or crossing. Stelmach is a two-time Long Poem Prize winner; she also won in 1990, and she would go on to win the Marianne Moore prize two years later, in 1994.

The short fiction in this issue is excellent; it’s difficult to pick out stellar examples, because across the board it is so strong. Kelly Watt’s “White Bird Rising” is disturbing, a borderline upsetting piece that does damage in five and a half pages. It’s difficult to read, and more difficult still to shake off. “Almost Real”, by Jay French, is also told from a child’s perspective, and is suffused with an energy and exhilaration that is totally convincing. The language sweeps readers up and transports them into the story, but also perhaps back into their own past. Elizabeth Ukrainetz’s “The Thin Green Tie” is another short knock-out: three full pages and a handful of unanswered questions, with an unforgettable final image. At the time, Ukrainetz was at the start of her writing career: her first published story had only appeared one year earlier. In 2016, her second novel was published. 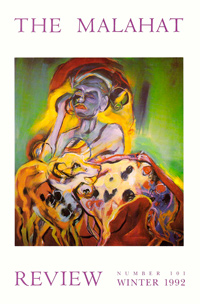