This is the last issue edited by Constance Rooke, and she makes her goodbye quietly. There is not a word from the editor inside the issue, only a short remark on the back cover: “Issue #100 of The Malahat Review is the last to appear under the editorship of Constance Rooke. To mark this occasion, this issue is longer than usual, includes art supplements in full colour, and contains work by the editorial staff as well as by a number of writers who have been closely associated with the Malahat over the last decade.”

Who was closely associated to the Malahat in the 1990’s?  The usual suspects seem to be P. K. Page, Marilyn Bowering, Sharon Thesen, Derk Wynand, Patricia Young, and Leon Rooke, husband of Constance Rooke.  As well as Michael Kenyon whose short story “Durable Tumblers” went on to win an honourable mention at the National Magazine Awards.

The issue opens with Yann Martel’s short story “The Time I Heard …” which went on to win a gold National Magazine Award.  Elizabeth Hay graces these pages with the short story, “Real Snow.” At this point she has only published one collection of stories—it will be 15 years before Late Nights on Air is published and wins the Giller Prize for fiction.  Michael Ondaatje was everywhere in the Malahat in the 90’s — colour photos, poetry, and in this issue an excerpt from The English Patient which was published as a novel the same month. While Dionne Brand’s poem “Out There” didn’t win any awards it is just as brilliant as her collection Ossuaries, which won the Griffin Prize 20 years later.

Another tradition associated with The Malahat Review is its Long Poem Prize.  How long has this contest been going on at the Malahat? Well it was 5 years old in 1992. What began as an annual contest in 1988 evolved into a biannual one after nine years when the magazine chose to honour fiction writers with the Novella Prize.  This issue closes with that year’s winner of the long poem prize, Mia Anderson’s from The Shambles, a terza rima that won gold at the National Magazine Awards. 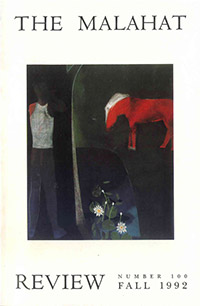