Two very well-known authors in the Canadian literary scene made contributions to this issue—P.K. Page sat on the editorial board, and Michael Ondaatje provided the cover photo. Readers will also find two poems by John Pass, winner of last year’s Open Season Award for poetry. These unusual and enigmatic poems are likely to stick in your head and make you wonder what’s at the bottom of them.

There are no reviews in this issue, which means that all 114 pages are devoted to poetry, fiction, and four glossy photographs by Robert Teteruck. The photographs capture the moods of individuals set against a backdrop of urban life. Notable prose pieces include Gayla Reid’s short story “To be there with you” which is also the title story of her collection that won the Ethel Wilson Fiction Prize in 1995, and Greg Hollingshead’s “Small Death.” Reid’s is a powerful and moving story about a journalist living in Vietnam during the war who has an affair with a married soldier, and is haunted by the things left unsaid between them. Hollingshead’s story also deals with an extramarital affair, between two professors who meet at a conference, one of whom is wracked with guilt and the fear of contracting AIDS. Hollingshead won the 1995 Governor General’s Award for English language fiction for his collection The Roaring Girl.

This issue contains an amusing poem by David Donnell about University of Toronto graduate students who communicate with one another in unnaturally literary language, for example referring to a cigarette as a “Walter Raleigh.” Readers will find a poem by current Malahat editor, John Barton, titled “Artificial Intelligence,” a reflection on what it means to be human in a digital age and the gap between our total experience and what is quantifiable. 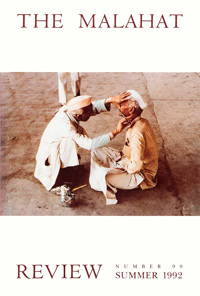