Print edition of Malahat Review Issue 42 (April 1977). This issue is not available for online purchase due to low stock. Please contact The Malahat Review at malahat@uvic.ca or 250-721-8524 for more information.

Editor Robin Skelton revisits the topic of Canadian Nationhood (it seemed to be much on his mind during the late 1970s) in this issue’s “Comment.” This time, however, it’s the matter of “Cultural Centralism” that concerns him specifically and he argues that cultural opinion in Canada appears to originate from “T.O.M” or “That Old Miasma” (Toronto, Ottawa, Montreal) and that the rest of the nation suffers for it. Skelton does take heart, though, that the old order may be changing and gives a few examples of “regional tokenism…creeping into some of the magazines.”

The following fifty pages of #42 are devoted to “Gog and Magog” by Lawrence Durrell (1912-1990). This is actually the first chapter of his novel entitled Livia, or Buried Alive, published the following year and which was the second volume of his Avignon Quintet. Durrell is best known for his masterful Alexandria Quartet, published between 1957 and 1963, and critics seem to say the Quintet (or at least the second volume of it) did not measure up to his previous books. Nevertheless, this excerpt contains some fine writing and pointed observations. “The more desperate the writer the more truthful the music—or so I believed then. Now I don’t know.”

Skelton also contributes a seven-page essay on the life and work of John Knight (1906-1975), a British poet whom Skelton knew in England during the 1950s, when both of them were involved in The Peterloo Group of poets and artists. The biographical sketch is accompanied by four black-and-white portrait photos of Knight and acts as an introduction to his fourteen-page poem series “Six Elegies and a Makelight.” This is a poet who deserves to be better known.

Canadian playwright and academic Diane Bessai’s scholarly side is represented here with “Who Was Cathleen Ni Houlihan?”—tracing the many incarnations of Ireland’s mythological “first lady.” The issue also features David Day’s “The Burroughs’ Bestiary,” from “A Bibliographic Dictionary of Monsters and Imaginary Beings Created by Edgar Rice Burroughs. And there are illustrations!

Other contributors to this rather quirky issue include Peter Russell (1921-2003) a British poet who, in the mid-1970s, served as poet in residence at the University of Victoria, and the Canadian poet R. A. D. Ford (1915-1988) who was once our Ambassador to the USSR. Distinguished company indeed. 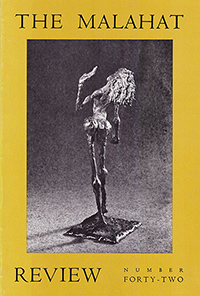