Print edition of Malahat Review Issue 1 (January 1967). This issue is not available for online purchase due to low stock. Please contact The Malahat Review at malahat@uvic.ca or 250-721-8524 for more information.

This is where it all began. The Malahat Review was founded by University of Victoria English professors John Peter and Robin Skelton. Initially subtitled “An International Quarterly of Life and Letters,” the first issue certainly lived up to its billing; just four contributors held Canadian residency! Still, this is a gloriously cosmopolitan collection that speaks to the editors’ wide-ranging tastes and international connections.

Another highlight is a selection of previously unpublished letters written by D. H. Lawrence (a small portion of more than 340 he wrote to S. S. Koteliansky from the time of their meeting in 1914 until Lawrence’s death in 1930). The twenty letters included here belong to 1914-1919, years of particular artistic struggle for Lawrence. They are edited, with notes, by George J. Zytaruk, by permission of the Estate of D. H, Lawrence.

This premiere Malahat may surprise you with the amount of nonfiction it contains. A thoughtful memoir by William Plomer, “Anglo – Afro – Asian,” looks back at a life lived in three very different places and cultures, namely England, South Africa, and Japan. Ruthven Todd’s “Miró in New York: A Reminiscence,” details his friendship and collaboration with artist Joan Miró—from Paris in the 1930s to New York in the 1940s. Poems decorated by Miró are also reproduced here. This issue also contains a posthumously-published one-act play, “The Toothache” by Irish playwright George Fitzmaurice (1877-1963).

There is, of course, fiction (“Time and the Woman” by Heinz Piontek, in translation from the Polish) and a handful of book reviews, which would become a Malahat staple. J. L. Tancock contributed a brief essay, “Henry Moore: Some Thoughts on His Recent Work,” augmented with twelve pages of black-and-white photographs of the famous sculptor’s “landscape figures” from the early 1960s. One of these images, “Atom Piece” (1964) serves double duty as a striking cover for this (now rare and highly collectible) important issue. 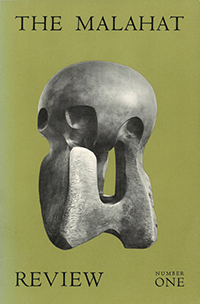