Issue 98 is special for a number of reasons: it’s two away from Issue 100; it uses on the cover an assemblage painting by the Canadian artist Lee Goreas called “Blackboard Lesson #1”; and the opening fiction selection, which takes up almost half of the literary content of the issue, is a fantastic novella called “Goon of the Moon and the Expendables” by the late Adel Wiseman. Born in Winnipeg in 1928, Wiseman won the Governor General’s Award for her first novel, The Sacrifice, in 1956. She was the director of the writing program at the Banff Centre for the Arts in the 1980s and she died of cancer in 1992. “Goon of the Moon and the Expendables” is a romp that follows the adventures of Gordon, Lucinda, and Josh whose passions for the “simple pleasures” provide inspiration and amusement. The voice and tone of the story are wonderful and the piece predates Mark Haddon’s The Curious Incident of the Dog in the Night-Time by fifteen years. “Goon” was the last story Wiseman published in her lifetime and Malahat is still the best place to read it.

You might think that a novella like that would weigh down one side of the issue enough to sink it, but there is some excellent work in the other half that keeps the magazine from listing to port side. There are fine poems by Jann Conn (who has had a very long relationship with Malahat and continues to publish poems with us), John Donlan, Robyn Sarah, and Denise Cammiade. Marcus Rayner’s short story, “A Priest’s Tale,” will make you put the book down and have a cup of tea after you finish reading it. Toward the end of the issue, there are some poems by Lesley-Anne Bourne from her series “The Helmet Maker’s Beautiful Wife” about Camille Claudel—an artist whose relationship with Rodin is one of the infamous stories of the role of women in the art world of turn of the century Paris. There are some excellent, edgy poems by Lorna Crozier, some poems by David McFadden which are as funny and odd as McFadden himself, and some poems by Janet McFadyen which are not so much odd as dreamy. These provide a lovely segue to the final story in the issue, “Car” by Semi Chellas, which begins: “In dreams now, I have to know if I’m going to be able to scream.” 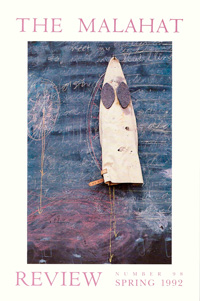