2001’s spring issue, which features work by Jan Zwicky, Bill Gaston, Patrick Friesen, and other notable Canadian authors, contains several poems and short stories where animals play an important role. David Seymour’s “Ten-Day Poem for Saskatchewan” explores feelings of displacement and home through gulls, pelicans, a deer, a fox, and a tick, culminating in the scent of Maritime wind on a cow’s breath. The eponymous animals in Elizabeth Smither’s “Suffolk Sheep,” remind the speaker “how strong beauty is: how compactly / assembled.” Wildlife weaves in and out of Patrick Friesen’s three poems in this issue, “clearing 1,” “clearing 2,” and “clearing 3.”

Bill Gaston’s short story “The Little Addict That Could” is primarily about a corporate office worker whose junkie nephew comes to stay with him, but it, too, is overrun by animals. The story contains a secondary plotline about salmon whose spawning channel has been disrupted. Bill Gaston’s book The Good Body is also reviewed in this issue by Lucy Bashford, who writes that “Gaston knows what to do with a blank page.”

Also noteworthy in Issue 134 are an excerpt from Colin Morton’s book-length work, “Poem for the Unknown,” Deanna Yonge’s poem “The Yard,” which is an exploration in self-ownership of the female body, and Barry Dempster’s meditation on rural living “Holland Landing,” which describes the village as being “consumed by childhood fantasies of what community / could be, an Eaton’s catalogue of paper dolls.”

Jan Zwicky has two poems in this issue. “Leaving New Brunswick” plays with both losing and finding a sense of place while “Soup,” is a playful poem in praise of the hearty dish which proclaims “in stew / is brotherhood.” 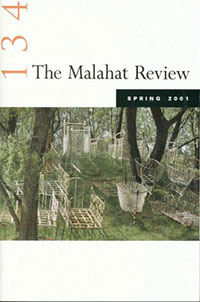