Print edition of Malahat Review Issue 135 (Summer 2001). This issue is SOLD OUT.

Alice Major opens this issue with her poem “Contemplatio,” which was one of the winners of The Malahat Review’s Long Poem Prize in 2001. The framework of “Contemplatio” maps the ritual used in ancient times to found a colony in Rome onto the formation of Canada.

In “Mansfield Park,” Sharon McCartney uses Jane Austen’s protagonist to launch into a poem about the speaker’s mother and happiness. Robert Mullen, a Scottish writer, contributes a short story entitled “Alex the God.” This short story was nominated for The Journey Prize in 2002. Victoria’s Patricia Young has two poignant poems in this issue. Her collection of poetry, Ruin of Beauty, was shortlisted for the Governor General’s Award in 2000. Tom Abray’s short story “Remote,” and poems written by Nancy Ross, James Norcliffe, and Susan Glickman are more highlights of this issue. 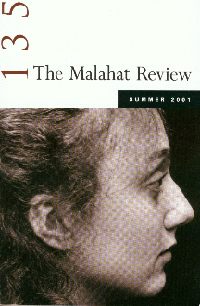