Blue Nude II (1993) by Sarah Gee—who also sits on the editorial board—covers this Fall issue of The Malahat Review. The figure looks toward the outside of the cover, waiting for the works within.

Marjorie Stelmach’s “The Tower” evokes the shade of Georg Trakl, an Austrian expressionist poet who battled with mental illness. Separated in five parts, each with a Trakl epitaph, Stelmach plumbs a darkness within herself that joins the two poets at the height and depths of song and stone. Susan Glickman continues the theme of understanding the internal, though more literally in “Fish are jumping, and the cotton is high.” Two poems by David McFadden continue the poet’s literary travels. Before the publication of There’ll Be Another (1995), “Dreamland Cuba” and “The Straits of Florida” craft portraits of Havana as if the reader floats in a fish tank under a stark Cuban light. Patricia Nolan’s short story “Beware of Dog” marks Johanne Hamilton’s confrontation with her father’s new dog, as well as a violent spiralling insanity.

A sublime collection of objects are rendered and transmuted within this issue. The idols, allusions, and classic figures (from paintings to poets) reveal themselves as dangerous, visionary, and nostalgic—yet in that askance way, as Gee’s Blue Nude implies. 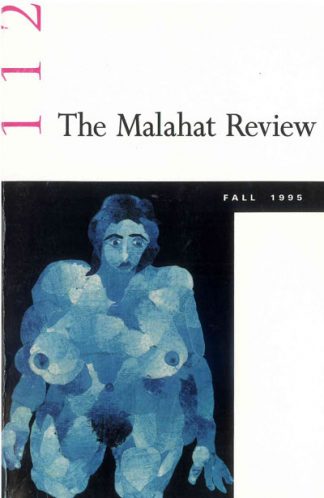