Two notable poets stand out in this Winter issue of The Malahat Review. Five poems by Tomas Tranströmer and ten songs by Jan Zwicky exemplify how poetry attempts an ineffable structure for memory and emotion.

Translated from the Swedish by Don Cole, Tranströmer’s “The Longforgotten Captain” reveals what is concealed in the shadow of memory. The six-part poem “Six Winters” describes the sharp chill of the many winters of experience. In “Nightingale in Badelunda” the poet fashions a temporal disjunction between the bird’s song and the poem: the moment and the memory. According to Don Coles, “no one is better than Tranströmer.” As readers, if we dealt in those sorts of poetic hierarchies, then his statement might ring true.

Jan Zwicky’s “Ten Small Songs,” winner of a 1995 gold National Magazine Award for poetry, sing succinct rhythmic experiences of Nature. She describes, in “Small Song: Sandwiches,” that a time of day makes for an ideal filling for a sandwich. In “Unsong” and “Unsong: August,” the speaker creates a level of meaning where technology and human progress seem to unravel and unhinge the order of the earth.

Other illustrious poets grace the pages of this issue: current Malahat Assistant Editor, Rhonda Batchelor’s “Glad Ghost” and “Watcher”; Carmine Starnino’s “Caserta, Italy—1945”; and Carole Langille’s “Scanning an Afternoon in Winter” and “George at 88.” These poems and the other works in The Malahat Review reward the reader with subtle beauty, like the memory of winter ice reflecting the myriad surfaces of our emotional world. 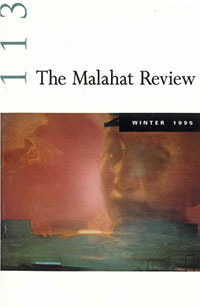