An issue containing an interview is always a pleasure, not only for the insights offered by the subject of the interview but also for getting a sense of the time in which the interview took place. In this issue, Eleanor Wachtel talks with Martin Amis about his then-recent novels (Time’s Arrow and The Information), and his views more broadly (in considering the themes captivating him at the time, he suggests that “Innocence is definitely what the world is losing” and predicts, about political correctness, “that label is going to be dead in a couple of years”). Wachtel leads Amis into difficult terrain, eliciting his views on topics including writing about the Holocaust, navigating the sensational media coverage he’s often attracted, and facing his own mortality. He answers thoughtfully, and ends with a lovely image on the privilege and power of the writer: “…I don’t know how people get through life without being artists in some way…Life would seem terrifyingly thin to me if I wasn’t constantly reshaping it in my head….it would look like a mess of days to me if I weren’t a writer.”

The issue also includes fiction by Lisa Moore, whose first story collection had appeared only months earlier, and Derek McCormack, whose first book, also a collection of stories, was about to appear in the second half of 1996. Maria Mutch’s story “Hot Hot Day” sits like a hidden ember in the issue, short and muscular, memorable for its cruelty. Mutch was a published poet at the time of this issue’s publication; she would go on to write a memoir shortlisted for the 2014 Governor General’s Award for nonfiction.

The poetry offerings feature some early work by Susan Gillis, a lovely piece by David Helwig, in what was his third Malahat publication, and two poems by M. Travis Lane, who at 82 recently became the 2016 winner of the Lieutenant-Governor’s Award for High Achievement in English Literary Arts. The 2014 winner of that prize, Anne Compton, is also represented in this issue, with her poem “Women Writing Men”.

Zsuzsi Gartner reviews debut work by Lorna Jackson and Diane Atkinson, whose stories of “women on the road, going places” she compares. Greg Hollingsworth’s The Roaring Girl is reviewed favourably, while Michael Hollingsworth’s ambitious collection of plays telling the history of Canada, The History of the Village of the Small Huts (at this point only plays 1-8 of what would be a 21-play series) is given a somewhat more guarded review by Michael McLennan (who was soon to be a writer on Queer as Folk). 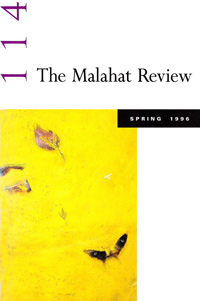