This issue does not contain any reviews, and is instead devoted exclusively to poetry and fiction. It begins with three poems from Susan Musgrave: “Imagine,” “Effort of Love,” and “Depression in Debrecen.” All three poems explore past trauma through the guise of every day activity, summed up beautifully in these lines from “Imagine”: “there is nothing / to eat, there is nothing to drink, / there is only history.”

Other notable poets in this issue include Tom Wayman (best known for his “Did I Miss Anything?”, a favourite of English and Creative Writing professors everywhere), whose “War on a Round Planet” comments on the negative consequences of war by imagining a world where a bullet fired from one part of the planet simply makes its way around the globe and returns to harm the original gunman, and Sue Wheeler, whose “Sari Shop, Bangalore” meditates on mortality as the speaker begins to see old age as “suddenly unreachable, as if / a country we’d planned to visit / had been torn from the atlas.” John Barton, the current editor of The Malahat Review, contributes a poem called “Chicken Boy,” which envisions an alternate reality where chicken pox is not a run-of-the-mill virus but a mystical imbuing of superpowers. Finally, Michael Crummey playfully analyzes a great Canadian poet with “David Donnell’s Schlong.”

Short fiction writers include Barbara Lambert, Alan Beard, and Karen Connelly, and the issue ends with Lorna Jackson’s short story “Round River.” The story uses excerpts from literature learned in childhood, threading an exploration of repressed childhood abuse and its effect on the protagonist in her adult life. 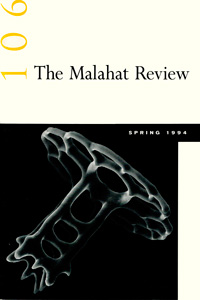