This mammoth special summer issue, concurrent with the XV Commonwealth Games in Victoria, includes writing from across the empire. According to Derk Wynand’s “Notes,” the issue encompasses a “cultural component” for the games, the tone set by the writers, and surprisingly, “features no Caribbean writers … living in Canada.”

Perhaps the most notable work, translated specifically for this issue, is Madulu Mohamed Waheed’s “The Silver Cylinder.” The short story relates the effects of a chemical weapon that washes up on the shore of the Maldives. Narration and the temporality of before and after the explosion, crafts a tone, ironically suggesting, “it was lucky in a way that [the bomb] had washed up on a place like the Maldives.”

The sole Canadian voice, Eleanor Wachtel, interviews Vikram Seth, winner of the 1994 Commonwealth Writer’s Prize for A Suitable Boy. This interview was prepared in collaboration with Peter Kavanagh and was also broadcast on CBC radio’s “Writers & Company.”

There are too many excellent authors to list them all, yet this multinational troupe represents the diverse voices of Australia to Zimbabwe; with a deft flip of the page, issue one hundred and seven, can showcase the many works that are not often seen in the pages of The Malahat Review. 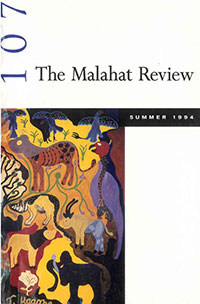