Herbert Siebner, one of Canada’s foremost painters, covers this winter issue of The Malahat Review with Alleine in Berlin (1964); however, the opening commences with Jan Zwicky’s poetic symphony: five poems “boundless and momentary.” She needs no introduction, yet these poems rise and fall like the first stitching of Songs for Relinquishing the Earth.

Maureen Harris continues in “wholehearted conversation” with the “Death of the Marlboro Man” and “Blue Willow.” Winner of a Silver National Magazine Award for poetry, Monty Reid’s “The Shale Disparities” follows with his song of stone, suggesting that “the ordinary is what is preserved, it recurs and recurs until / there is no other name for it but permanence.” Colin Morton, with “At a Nameless Bend in the River” attempts to “confound our pretensions.” Three poems by John Donlan, “Plunge Pool,” “Artifact,” and “Immune,” explores “his body’s deep response” to “a universal [and] a particular,” “not just some metaphor / for states of mind.” Cornelia Hoogland’s “Here and Now” and “Boulevard of Plums the Morning They Open” are representative poems from her second book (Marrying the Animals) unfinished at the time of this issue. “Through a Slit in the Tent,” a three-part poem, Carole Glasser Langille’s erotic gaze relates “a story that begins at the end.” What would 1990’s poetry be without Don Mckay’s “The Laugh” and “Short Fat Flicks”? These two poems, one “dressed in a sneeze” and the other a place where “we feel ideas wriggle into costume and images reach toward / us out of light,” reminds the reader of audience participation and how “everything will be incarnate.” David McFadden’s three poems, “Timon of Athens,” “Much Ado about Nothing,” and “Blue Angel,” teem with allusions, recalling a history rife with “timelessness” and “penis envy.”

From award-winning musicality and geology, to the bonds people fashion across time, this issue of The Malahat Review resonates with many different aesthetic tastes. 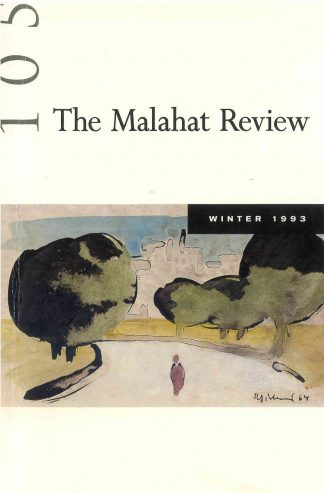