In this issue, acclaimed Canadian poet P. K. Page works with the glosa, paying tribute to Dylan Thomas, T. S. Eliot, and Pablo Neruda. The Malahat Review would later pay tribute to Page in 1996 with issue #117, a special issue to commemorate her 80th birthday. Lorna Crozier, a now newly retired professor in UVic’s Department of Writing, contributes three poems. Her style is often rooted in nature, and her pieces in this issue are no exception. Crozier would later be featured in issue #170 (Spring 2010) of The Malahat Reviewalongside her husband, Patrick Lane. In 1993, poet Julie Bruck won Honourable Mention at the National Magazine Awards for two poems included here, entitled “Summer on Rewind” and “The Goldfish.” Bruck’s first book of poetry was published the same year with Brick Books. Robyn Sarah, a writer from Montreal, made her mark with “Accept My Story,” a piece which was nominated for The Journey Prize in 1994 and which won Silver at the National Magazine Awards for Fiction in 1993. 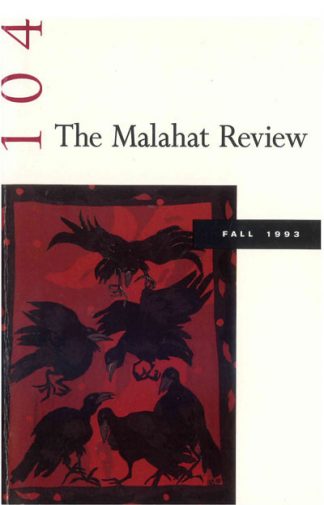