Barbara Lambert’s novella, “A Message for Mr. Lazarus” takes up over half of the pages of this issue. What literary magazine does that? Well, The Malahat Review does, obviously. Why? Because “Mr. Lazarus” was the winner of the 1996 Novella Prize (Lambert was also a finalist in Malahat’s first novella contest). The prize itself separates us from some other literary magazines simply because we have, through this contest and its biennial counterpart, the Long Poem Prize, asserted the importance of these two slightly unwieldy forms (too short to be a book on their own, but too long for most quarterlies).
“A Message for Mr. Lazarus” is an example of why such dedication is worthwhile. It is a beautiful, moving story of a character known as “Wolf” who has escaped to a tropical resort hotel. He is on the run, in some ways, from the emotions attendant with, and the reality that his lover back in wintery Canada is dying of AIDS. It is a rich story and requires all of these Malahat pages in order to unfold with the grace that it does. As the title suggests, there several sorts of deaths and resurrections in the story and its complexities are richly layered. Lambert’s writing here reminds me of the best of Timothy Findley’s work and I suspect she would cite him as an influence. AIDS was a daily subject in the news in 1996, and though we hear the term less in 2017, the story is no less poignant now than it was thirty years ago.
The rest of the issue is for poetry: John Reibetanz, Sylvia Legris, Anne Swannell, Harold Rhenisch, and John Pass. Ken Babstock makes jigging for cod seem like a strange thing to do in “A Mainland Boy in Eastport.”  Julie Paul gets cheeky in “Cat Got My Tongue,” and Tom Wayman meditates on “Autumn’s Gate.” Eric Miller, who will one day become the most erudite member of Malahat’s poetry board has two poems herein, and the issue is rounded off by seven poems by Tomas Tranströmer, here translated from the Swedish by Don Coles, himself no slouch when it comes to poetry. 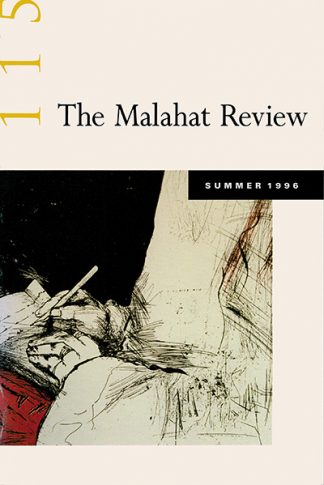