This issue opens with some exciting poetry, as it begins with four poems by Don McKay, “Setting the Table,” “Setting up the Drums,” “What Kind of Fool Am I?” and “Eclogue: Abandoned Trucks,” followed shortly by three poems from Susan Musgrave. These two groups of poems bookend Margaret Hollingsworth’s short story “The Faithful Orchid.”

Evelyn Lau makes an appearance in this issue, with her short prose piece “Wedding Reception,” which is a four-page sketch that forms a humorous and whimsical portrait of dysfunctional individuals gathered together at a wedding reception. Annabel Lyon makes her first Malahat appearance in this issue, with her short story “Black.” “Black” is about the bizarre and emotionally stunted relationship between a man and his adopted daughter, narrated in a non-linear fashion, with past events revealed at the end of the story.

Also appearing in this issue is an interview by Eleanor Wachtel with Jamaica Kincaid. Their conversation revolves mainly around Kincaid’s life in the U. S. contrasted with her native Antigua, mother-daughter relationships, and Kincaid’s novel Lucy and its protagonist. Interestingly, the interview was conducted in two parts, one in July 1993 and one in January 1996, so it provides readers with a cross-section of three years of Kincaid’s life and thoughts. At 17 pages long, it is tantalizingly brief.

There are no book reviews in this issue; Sue Wheeler’s short lyric poem of twenty lines, “Grace,” concludes the issue beautifully, on a strange and wonderful note. “Grace” describes birds feeding from a cherry tree, while also containing such reflections as: “did we imagine/ carnations would bank the halls/ of our lives?” 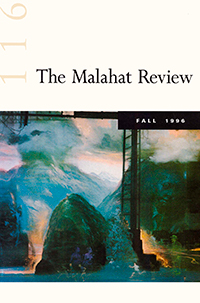