Although its cover photo, “Les Cosmos,” by Richard-Max Trembley, is a rather somber one, this issue’s contents are as bright and varied as those same flowers in a sunny garden. The delight in reading back issues of The Malahat is the discovery of so many authors new to me or finding early work by those I have come to admire over the years. In the former category, I thoroughly enjoyed the story “Milk,” by Julianne Ortale, who was, at the time, based in West Hollywood while pursuing a Master’s degree in fiction. I have made a mental note to search out newer work, since “Milk” was such a finely drawn, imaginative piece about a Mrs. Poovey, a seventy-three-year-old woman who suddenly finds herself capable of being a wet nurse. In the category of authors I have come to admire, I must surely include Victoria’s Bill Stenson, whose masterful story “Oil Paint” is a finely drawn portrait (to extend the metaphor) of three generations of an odd family. They may be down on their luck, and hoarding secrets, but bonds are deeper and stronger than they realize at first. Also of note in this issue’s fiction is the opening story, “Small Comfort,” marking the debut appearance of Saskatchewan’s Jacqueline Baker, whose first, award-winning book, A Hard Witching, was published the following year. “Small Comfort” takes place in a small prairie town “the summer Cora Mae Clark and her brother Boyd turned up.” For narrator Audrey, who’d only just kicked [her] habit of sleeping with a nightlight,” their appearance upsets her equilibrium. City kids, Cora Mae is brash and self-assured—or tries to seem so—while older brother Boyd is “like some clumsy marionette, capable of sudden bursts of absurd energy.” Audrey does not warm to Cora Mae, despite the other girl’s attempts at friendship, but is strangely drawn to the odd fragility and social indifference of Boyd.

Of the poets represented here, I also find a heady mix of new-to-me and familiar names. A single poem by Oregon poet, Kelly Terwilliger, titled “Raptor Care Centre,” takes an unlikely subject and delivers exquisite lines. “From every enclosure: / the shift and fold / of wings, all these elegant birds / fierce in the cold. // Darkness comes so fast, so often / this time of year / like a great eye shutting.” Among the more familiar poets, we have Adam Dickenson, John Donlan, Anita Lahey, Dan MacIsaac, and Sandy Shreve. Shreve’s “Autumn Pantoum” is a quietly evocative homage to the season in a masterfully constructed form poem.

There are only a handful of reviews in this issue, but they are all delightful. How wonderful to read Daphne Marlatt’s consideration of Maxine Gadd’s poetry collection, Fire in the Cove. Even more astonishing, how great to read Jay Ruzesky’s appreciation of Yann Martel’s Life of Pi, complete with an anecdotal aside about attending pre-school with Martel and being wowed by his imagination even then. 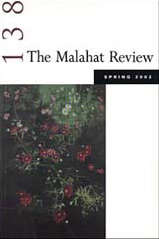