Issue 146, released in March 2004, contains four pieces of prose, thirty poems, and eight reviews. The collection of writers is diverse in both style and level of literary recognition, but the work in all forms is outstanding.

Although the issue is weighted in page-count towards poetry, the first piece is a memorable short story: Bill Gaston’s funny, dialogue-based “The Beast Waters His Garden of a Summer’s Eve.” Gaston, a current member of the University of Victoria’s faculty of Creative Writing, contributed the hallucinatory telephone dialogue of pop-culture references that culminates in the shame inherent in a plea for help. It also conveys the deeper connection between friends that can occur out of the humility of failure, of weakness. The story is presented as a transcript of a recorded conversation between brothers, complete with the per-page cost of transcription; this gives the work a sense of a casual and realistic humour that grounds its subtly-political subject matter. The writing is light, but evocative, containing references to both alcoholism and mental illness, Hitler moustaches and Martha Stewart.

This issue contains a serious amount of excellent poetry, including three by Douglas LePan, two each from Patricia Young and Elizabeth Bachinsky, and a pair from David Zieroth. The poetry content is varied in style, tone, and subject. There is a remarkable range of talent on hand, from Ross Leckie’s deep pastorals to Rhea Tregebov’s Latin travelogue. The excellent consistency of the selection reveals the sensitivity and skill of the Malahat’s editorial board at the time.

Long-time Malahat editor John Barton provides some commentary on the poetry of Douglas LePan, a twentieth-century pioneer of Canadian gay poetry. LePan’s three poems, distinctly different from the more contemporary work in the magazine, are at ease through time, and his subject matter is sensual and engulfing. 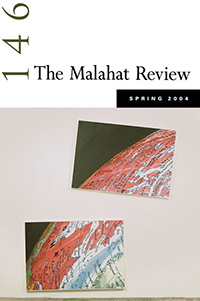