This fall issue of Malahat opens with Jacqueline Baker’s story, “Wish,” about a hockey mom weighed down with feelings of inadequacy. Her alcoholic husband is AWOL, and she feels the pity of the other hockey parents as she tries to be what she thinks her son needs. Paul Headdrick’s, “The Studies of Fernando Sor,” is the story of an exiled and indebted Spanish composer living in Paris at the mercy of his landlady who receives prestige from his continued residency. The narrator in Gerald Lynch’s, “Dwarf Star,” is filled with guilt as he tries to avoid the attention of his neighbour, Alcohol Al Rubin’s son, Billy, who has Fetal Alcohol Spectrum Disorder. This issue holds its fair share of anguish. Perhaps foreshadowed by the cover art—a painting by Luis Merino of Frida Kahlo—and the impending darkness of winter?

As with Frida, all is not sorrow. Victoria’s current poet laureate, Yvonne Blomer, is represented with an early poem, “Outside in the window of the world.” Nova Scotia’s Brian Bartlett has three poems. He has the distinction of having won two Malahat Long Poem Prizes: “Underwater Carpentry” (1992), and “Hawthornden Improvisations” (1999). Also in this issue, Anna Adamek reviews Bartlett’s eighth book of poetry, The Words Wanting Out: Selected and New (Nightwood Editions, 2003). There are three poems by Governor General’s award winner for poetry (1995), Anne Szumigalski (1922-1999), for her book Voice. She helped found both the Saskatchewan Writers’ Guild and Grain. Rosemary Clewes has a series of poems called “Thule Explorer,” about kayaking in the Arctic. Other poets included are Lesley-Anne Bourne, Marilyn Bowering, Benjamin Scott Grossberg, Warren Heiti, and Ruth Roach Pearson.

The issue concludes with David R. Jarraway’s review of Jan Zwicky’s Wisdom & Metaphor. He calls it a “book-length philosophical meditation on the genius of metaphor,” and her departure from Aristotle’s proclamation that “it is one thing that cannot be learned from others.” Zwicky believes one can learn from the “mastery” of others and uses the book’s format to demonstrate. On the left-hand side are thoughts from writers as diverse as Heraclitos, Wittgenstein, Charles Simic, and Wislawa Szymborska, on the right, Zwicky’s own “openings” into these writers. 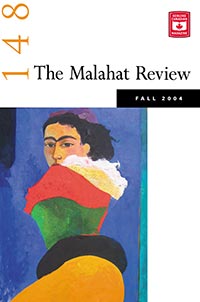