Among the noteworthy poems in this issue is “Water Birth,” by Richard Harrison, which begins: “With neither language nor a cry, you made me your father / The day you were born in a kiddie pool in our living room.” It is an unsentimental depiction of a particular home birth that seems emotionally involved even as it finds fresh language to express the wonder of new life. A page later Shane Rhodes’ poem, “Portrait” is on the other end of the life spectrum—an ode to his dead grandfather. Vivé Griffith’s poems “People are Tearing Things Down,” and “Trampoline” are a good pair of narrative poems. In each, the language—stretched taut as a trampoline—elevates the story and leads the reader to deeper considerations. Barbara Nickel’s poems are well made. “Flight” imagines Montreal from above as embers that “smoulder under sand,” while the narrator waits for her prodigal brother to return. Her other poem, “Sestina for the Sweater,” is charming and anyone who has started a big knitting project will relate to the way the speaker wonders (in a lovely, metaphorical way) “what would it take for my needles / to finish this into a whole…?” Other poets on the squad for this issue include Catherine Owen, Adam Dickinson, Dore Kisselbach, Judith Pond, Russell Thornton, and Pamela Porter.

Of the short stories in the issue, my favourite is Ian Bullock’s “This Way, Cowboy.” The story uses the device of a mature narrator telling the story from his younger self’s point of view, a distance that is necessary because the young man’s tale would be too harsh if it were told in present tense; the boy is living in world that is thoroughly disturbing.

Barbara Romanik’s story, “Seven Ways into Chandigarth” has an interesting structure. It is divided into seven sections subtitled with descriptions of roadways and paths that lead into the city in different ways. The story was chosen for the Journey Prize Anthology in 2005 and is Romanik’s way into the architecture of Chandigarh, India, and more particularly into the work of the Swiss architect Le Corbusier, (who drew the master plan for the city of Chandigarth) and his wife, Yvonne Gallis. Le Corbusier is the main character in the story. He was a designer with a strong personality and an unwavering vision about what he wanted architecture to do, which is what this story explores. 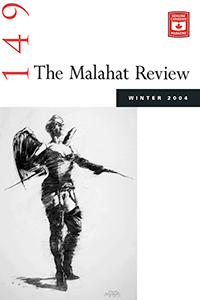