Issue 21 has commonly been known throughout The Malahat Review’s history as the “Asian” issue. With the help of the Literature Program of the Asia Society, this issue consists of several prominent Chinese and Japanese writers, even a Tibetan monk. Several other contributors’ works pertain to different places in Asia. The cover, by Ellis Johnson, is a charcoal drawing of English poet, Robert Graves, whose poem “Six Blankets” appears in the issue. Fleur Adcock, well-known New Zealand poet, contributes two poems as well: “Notes on a Performance” and “Briddes.” 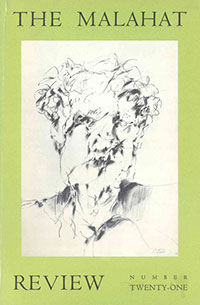