Issue 22 is among the first issues of The Malahat Review to be edited solely by Robin Skelton and the third to include an editorial comment. Although John Peter and Robin Skelton previously deemed editorial comments unnecessary, this particular comment rounds out the issue nicely. Skelton explains that the issue is largely devoted to material from or about Ireland and gives readers a short introduction to the Irish perspective from, of course, Skelton’s perspective.

The Irish influence is captured in almost every genre.  The art prints that accompany this issue feature etched portraits by Jack Coughlin of well-known Irish writers such as George Bernard Shaw, James Joyce, W. B. Yeats, and Thomas Kinsella.  Samuel Beckett’s face graces the cover.

In the nonfiction department, David Krause is featured with an essay entitled “The Barbarous Sympathies of Antic Irish Comedy.” The title of the essay is enticing on its own and Krause’s excellent and witty prose adds another layer of appeal.

Alongside the Irish are two notable Canadian writers, Susan Musgrave, who has five poems featured, and Derk Wynand, who has translated Dieter Wellershoff’s radio play “The Shadows” from its original German. 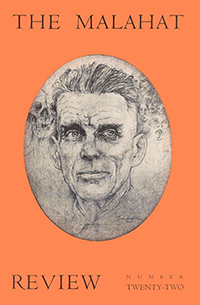