From Robin Skelton’s opening “Comment,” bemoaning the “huge pile of new poetry books” that cannot all be reviewed (a situation that still exists today, I might add) to the cache of excellent reviews of books of various genres, issue #23 is one of the most enjoyable of the Malahat’s back issues I’ve read—so far.

A portrait of Skelton by Myfanwy Pavelic (1916-2007), who selected it from among her other pictures (ten black-and-white plates are included here) graces the cover, prompting Skelton to admit to a certain embarrassment and to muse whether the “character of a periodical” could be “derived from looking at the face of its editor.” Skelton’s fourteen-page essay, “Myfanwy Pavelic: Perception & Solitude,” is a remarkably astute overview of the Victoria-born artist’s early life, horrific physical challenges, artistic influences, training, and motifs. This appreciation of Pavelic, now considered one of Canada’s most important portrait artists, would have introduced her to many readers, both local and international, for the first time.

The art of translation is predominant in this issue, with Larry Gregg’s English version of Viktoria Tokareva’s “A Ruble Sixty…That’s Not Much,” a fantastical story concerning a cap that renders the wearer invisible. Fleur Adcock, the famous New Zealand poet, contributes her translations of four poems from The Greek Anthology, and linguist Peter Russell translates no less than twenty sublime works by the great Russian poet, Osip Mandelstam (1891-1938).

American author Paul Theroux’s, “A Deed Without a Name,” is a short story with a decidedly twisted ending, that also manages to be blackly funny. In Joyce Carol Oates’ “Silkie” a young woman’s flirtatious ways and misguided honesty fail her when faced with pregnancy and a difficult decision. “It seems to me that the hundreds of times I did things like that were just one single time, locked safe somewhere with me still that age and safe from growing up, and I could maybe get back to it if I knew how.”

A final note regarding reviews: older issues of the Malahat did not include reviewers as contributors insofar as biographical notes are concerned. I have, in my count above, included them as such and might also note that Issue #23 contains reviews by Marilyn Bowering, Leon Rooke, Constance Rooke, Charles (Mike) Doyle, and S. W. Jackman. 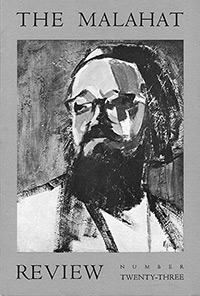