It is perhaps an indicator of Friedrich Nietzsche’s iconic status that the cover of this issue, based on a symposium celebrating the centenary of The Birth of Tragedy’s publication, need not include his name. The stark woodcut image (based on a drawing made during the last years of his life) prominently displays the well-known profile of the “mad philosopher” recognized by all.

Against the trend of his writings and their import being obscured and even distorted by critics with ideological agendas of their own, editor and translator David Thatcher successfully assembles a volume which gives Nietzsche “the right kind of attention— serious, responsible, dispassionate, unpartisan.” He takes note of how the Nietzsche revival from the 1950s shows no signs of abating, something which was as true then as it is now.

One of the three main components of this collection are the essays on aspects of Nietzsche’s life, work and reception; of these, George Woodcock’s “Nietzsche in the Thirties” provides a thorough account of Nietzsche’s international reputation and outlines which aspects of his thinking had become prominent in the pre-war period.

The second, consisting of poems and short pieces about Nietzsche, is notable for poems by George Macbeth, George Barker, Irving Layton (and others), the last of whom engages in a discussion of Nietzsche, suffering, and tragedy with Eli Mandel. It seems that for the writers and artists in this volume, Nietzsche’s notion of artistic creativity (exemplified by the Apollo-Dionysus tension) makes him less a philosopher than an inspiring poet-thinker.

Nietzsche’s voice in English translation sounds strikingly contemporary, most notably in Thatcher’s translation of “On the Pathos of Truth,” a fascinating companion to the much better known essay “On Truth and Lies in an Extramoral Sense,” while Derk Wynand’s translations of “Three Dionysus Dithyrambs” are perhaps more successful as free translations than the other verse epigram translations into rhyming English from The Gay Science. 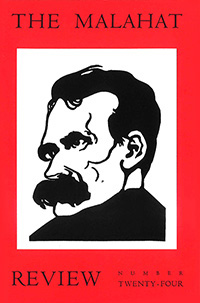