In his prefatory note, former University of Victoria professor and Graves scholar Anthony Edwards provides some necessary insight and background into the most unusual offering in this issue: the first publication of a hitherto unknown work by Robert Graves (1895-1985), namely a “re-writing” of the first two chapters of Charles Dickens’ Pickwick Papers. The proposal to re-write the novel was Graves’ attempt to help out a struggling writer friend, David Cameron, and to get him started on completing it. Graves had already written an abridgment of David Copperfield and, in his Foreword to that project, wrote about the challenges. “[And] since Dickens’ failures are not always due to his saying too much but sometimes to his saying too little, this re-writing will call not only for reduction but for occasional expansion.” Graves is also represented in this issue with the long poem, “A Marmoset’s Miscellany,” originally published in 1925 by The Hogarth Press under a pseudonym, and by facsimiles of his worksheets for “A Bracelet,” from his collection Poems 1965-1968.

The Spanish-born academic-in-exile, R. M. Nadel contributes a translation of “The Public,” the previously unpublished draft of a play by Federico Garcia Lorca. This is an avant-garde drama of “labyrinthine confusion,” wherein Lorca cloaked a most daring expression of human motivation, specifically homosexuality. Written in 1930, it predates techniques and symbols that would later characterize works by the likes of Becket and Genet. This play is followed by poems of tribute to Lorca by Nikolai Aseyev, Robert Rozhdestvesky, Evgeny Evtushenko, and Joseph Brodsky, all translated from the Russian by John M. Gogol, and the beautiful poem, “Wine,” by Pablo Neruda, translated from the Spanish by Anthony Kerrigan. Kerrigan also translates “An Irish History: The Shape of the Sword,” from the Spanish of Argentine author Jorge Luis Borges (1899-1986). This curious piece is a story within a story. Borges writes: “I tried getting into the good graces of the Englishman; I resorted to the least acute of passions: patriotism. I said that a country with the spirit of England was invincible. My interlocutor agreed, but added with a smile that he was not English. He was Irish. From Dungarvan.”

This is, over all, one of the most international of the early Malahat Reviews. The cover art is by Polish artist Jan Le Witt (1907-1991), along with eleven black-and-white plates depicting some of his paintings and drawings, as well as five samples of his writings. 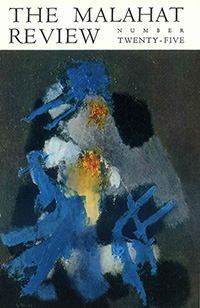