This themed issue of The Malahat Review showcases works by and in honour of Rafael Alberti (1902-1999), one of the most celebrated and respected literary figures in Spanish literature. “A Gathering in Honour of Rafael Alberti” brings together an impressive list of contributors to pay tribute to an artist who, in the words of guest editor William David Thomas, “is a man at the centre of Spanish cultural life.” The willingness of internationally acclaimed Surrealist Joan Miró (1893-1983) to create the cover art for this special edition is testament to the love, loyalty, and deep respect that he and many fellow artists had for a man they considered “a resplendent brother.” Readers will delight in the superb sampling of poems, essays, plays, illustrations, and photographs. Translators Lucia Graves, Mario Angulo, Mervyn Coke, and Anthony Burgess skillfully bring to life the language and culture so beloved by Alberti and his artistic compatriots.

Issue 47 opens with J. P. Gonzalez-Martin’s “Biographical Sketch of Rafael Alberti.” In it, he traces the life of the artist who began his days as the son of Italian expats who had settled in Cádiz, a region heavily impacted by the many changes occurring at the dawn of the twentieth century. The biography serves as a tight and revealing timeline of Alberti’s development as an artist, citizen, and political activist. Readers will get a glimpse of Alberti as an undisciplined student, a young man whose passions led him to political revolt and exile, and finally as recipient of the 1965 Lenin Prize for Peace. In her provocative essay Solita Salinas de Marichal’s argues that Alberti’s “poetic trajectory is a continuous search for lost paradises” and José Luis Cano’s “The Roads of Rafael Alberti,” which acknowledges that although “[Alberti] could not sing in his own land, his poetry could nevertheless take roots in Spain, break down walls, cross borders and reach on invisible and salty wings where the poet in person was unable to go—as did his painting.”

Pablo Neruda’s work graces the pages with “A Tribute to Rafael Alberti,” an intimate and moving piece written while in exile in America (1948).  For him, Alberti’s poetry is “a scented light, the emanation of a world.”  Poems by Jorge Guillén, Celso Emilio Ferreiro, Eugenio Montale, and Pere Quart (Joan Oliver i Sallarès) are included.  In his poem, “Happy Ballads to Greet Rafael Alberti in my Absence,” José López-Pacheco conveys a sentiment shared by fellow admirers of Alberti when he writes:

What irony, Rafael,
that a tree uproot
to nourish on another soil!

You taught us how:
keeping your roots alive without earth
to return, hope intact!

No fewer than twenty-four black and white photographs from Alberti’s private family collection, including candid shots of friends Garćia Lorca, Luis Bruñuel, and Antonio Machado, will captivate readers. An exquisite selection of sketches and prints by Alberti and other noteworthy artists, including Pablo Picasso, Antonio Saura, and Antoni Tàpies, round off this not-to-missed issue. 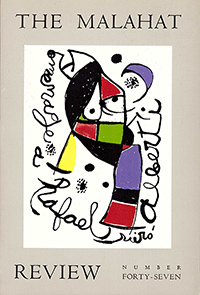