“It is twenty-eight years since my name first appeared on the title page of a book, and, shortly afterwards, upon the masthead of a publishing house…I was proud, and remain proud, of my first book. It was published in 1950 and was a pamphlet called Leeds University Poetry 1949. …[It] was published in an edition of 500 copies at half a crown; I wonder what it would fetch now, supposing any copies of it have surivived. …I suspect it might be humiliating to find out.”
—Robin Skelton, from his opening “Comment.”

Bowering’s story, “A Tale Which Holdeth Children From Play,” about a high school principal obsessed with violent films, is a perfect example of the kind of playfully witty writing he is known for: “Some men like to watch fights between women, especially in the jungle mud, with all their clothes ripping. He had some of those but he didn’t look at them very often.” Kinsella’s “The Grecian Urn,” about a couple who plan to spend eternity in what they believe to be “the urn to which John Keats had written his immortal Ode To A Grecian Urn,” also stands out among the fiction.
And at the centre of the issue is Phyllis Webb’s masterfully multi-directional poem “Socrates,” which visits the philosopher at the time of his death while analyzing the question of one’s own soul’s mortality:

Even his last words
a question.
What a dumb play
for one who knew
all the answers
his questions
were answers.
“For is not philosophy
the study of death!”

Internationally, the issue contains a poem by the French poet Yves Bonnefoy (translated by Marc Elihu Hofstadter), who would appear again almost 37 years later in issue #188 (Fall, 2014) with another short poem translated by John Reibetanz.

The issue’s penultimate poem, “Finale,” written by Giuseppe Ungaretti (1888 – 1970) and translated from Italian by Dora M. Pettinella, is the only posthumously published piece in issue forty-six. It echoes heavily with the dark simplicity that only a man who had spent a good deal of the twentieth century in a fascist Italy—and had been a personal friend of Benito Mussolini—might be able to afford. 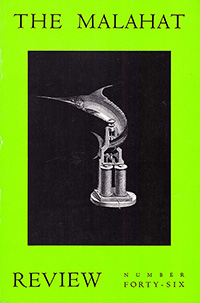