In celebration of the jubilee anniversary of the University of Victoria which had begun 75 years before this issue as Victoria College in 1903 the Malahat‘s first West Coast themed issue was published. The issue celebrates how the “West Coast Imagination,” rooted in the First People’s oral tradition as captured by Marius Barbeau, Franz Boas, and John Swanton, has bloomed into a Renaissance era within West Coast literature. In his introduction, Robin Skelton writes “All stories… ‘about’ logging camps, fishing expeditions, hunting trips, and canoeing… are legends in these parts.” This issue is full of poetry of the landscape and west-coast life such as: Roo Borson’s “Eucalyptus,” Seán Virgo’s gold National Magazine Award-winning poem, “Home and Native Land,” Susan Musgrave’s “Woodcutter, River-God and I,” and Patrick Lane’s “Day after day the sun,” to name a few, as well as a collection of “Eight Found Poems from the Journals of Emily Carr” by Rita Hammett.  Included are also essays, one by Constance Rooke on P. K. Page’s impact on Canadian poetry, another on Patrick Lane entitled “Pine Boughs and Apple Trees” by Marilyn Bowering, even a few drafts of Susan Musgrave’s poem “Hinging the Blind Memory,” as well as several works of art by B.C. artists. 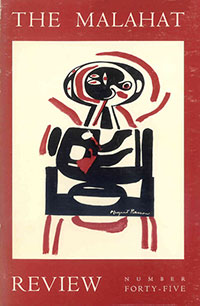