Robin Skelton opens the issue with a comment praising the Canada Council for their support of writers and a nod to John Robert Colombo for his works including Colombo’s Canadian References (“six thousand entries providing basic information on people, places and things of Canadian interest and importance”). Skelton refers to the seventies in Canada as a “gathering time” in which many writers were coming together to create anthologies pinpointing a cultural identity for Canadian literature. However, Skelton recognizes a neglect of Canadian content on the International literary scene and particularly laments the lack of Canadian literature courses offered in universities (he would surely be pleased to hear of UVic’s current Canadian Literature program including courses such as Modern Canadian Fiction, Modern Canadian Poetry, and Canadian Literature in Transnational Times).

Despite the introductory cry for Canadian content, the issue opens with the beginning of an autobiography from British author, Anthony Burgess (1917-1993).  Fifteen years after the publication of A Clockwork Orange, on his sixtieth birthday, Burgess writes “You’ve Had Your Time,” a very self-conscious seven-page account of his personal history. He begins by discussing the fluidity of truth in memoir and is sure to disclaim that “no man’s life is, in the eyes of God, better worth recounting than another’s” before he “propose[s] to present, as candidly as shame and pride will allow, the genesis and career of the artist [he] thinks [he] know[s] best”—himself.  Content concerning Burgess, including Five Sonnets by Giuseppe Gioachino Belli translated by Burgess and an essay by Geoffrey Aggeler entitled “Enderby Immolatus: Burgess’The Clockwork Testament,” continues on to cover a third of the issue. Four full-page black and white iconic portraits of Burgess talking and smoking round out the homage.

Still diverging from Canadian authors, this issue offers “Earth Poems”by Javier Heraud (1942-1963), translated from the Spanish by Richard H. Haswell. Heraud was a Peruvian poet and member of the guerrilla group Ejército de Liberación Nacional. Sectioned into ten parts, the poems maintain an assertive tone as the poet explores their personal relationship to the natural environment. These poems make room for phantasmagoric images (“I want to sprout two/ geraniums from my eyes, two/ white roses from my forehead” to “Everything is wood, the/ dawn of your sleepy eyes,/ the fingers of my clutching/ hands, the sun in its turbulent/ descent.”) and end in a celebration of life “to love the world/ with out-stretched arms.”

Of particular interest to me are the black and white collages by Chilean surrealist poet and visual artist, Ludwig Zeller. An image by Zeller featured on the cover of the issue illustrates a giant bird crossing over a square of horse and buggies, set before an enlarged topless woman lounging on a rose-windowed church that blooms shells and sprouts a silver spoon. A series of sixteen more bizarre collages delight the eyes, and stir the mind with dreamlike imagery of fishes, horses, people, cutlery, machinery and even a game of pool, watched over by a kiwi-headed lion tooting a horn. These playful images compliment some of the more uncanny corners of the issue (such as Heraud’s poems) while simultaneously holding an emotional and political weight. 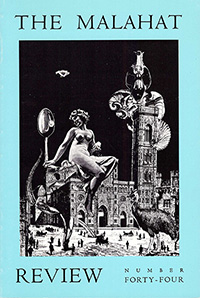