Issue number forty-three of The Malahat Review includes four poets in translation, a play by Robert Graves (1895—1985), three poems by Marilyn Bowering, and a showcase of the paintings and drawings of William Featherston (1927—2009).

Three poems by Marilyn Bowering illustrate the moving, early work of a now-established Canadian poet. “Winter Harbour” unfolds a place “where your past cannot find you”; in “North Coast Lament” the figure of a fisherman is “drinking all the time”; and finally, in “Animals are Surplus”, “all the wild animals / are in town.”

Indeed, through the translations and works of both local and international poets, Issue 43 produces a literary conversation, across language, that continues to this day (Issue 188). 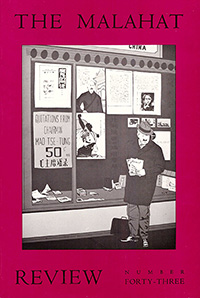