It certainly can’t be said that Malahat founder and editor Robin Skelton ever shied away from weighing in with a voice of reason when popular opinion struck him as ludicrous. His regular editorial comments in issues of the magazine from the early 1970s reveal a man who recognized the power of the pen—something much in the news in these early days of 2015—and who didn’t hesitate to wield it. Metaphorical feathers were often ruffled. In Issue #40, Skelton takes to task those overly zealous nationalists who felt that all university teachers who were not Canadian citizens should be deprived of tenure (if they had it) and dismissed. Another extreme position, evidently voiced in all seriousness, was that “Creative Writing students should not be required to read any books by non-Canadians.” Skelton’s scathing response is deliciously articulate and worldly.

Another particular highlight of this issue, for me, is “Young Bucks,” a hauntingly lovely piece of writing by Nescio, the pen name of J. H. F. Gronloh (1882-1961) one of the most popular authors in Dutch literature, translated here by Felix J. Douma. I can’t be sure if this is fiction or memoir, though I suspect it is the latter since the immediacy of the scenes and characters suggests an intimate knowledge of both. The narrator recalls the listless days and nights of four young male friends, all with hopes and aspirations for their lives, who nevertheless seem more or less content to drink, to smoke, to talk, read, admire girls from a distance, and to dream. “It was an amazing time. Now that I think about it, that time must still be going on; it’s there as long as there are boys of nineteen, twenty years old around. But it’s ancient history for us.”

The distinguished American writer William Fifield (1916-1987) is represented here with his short story, “Pablo.” Poetry from Patrick Lane and John Marshall add some Canadian content to this international gathering, and an essay by Robin Skelton on long-time Limner member, the Winnipeg-born sculptor Robert deCastro (1923-1986) is complemented by a series of black and white plates of his work, one of which graces the issue’s distinctive cover. 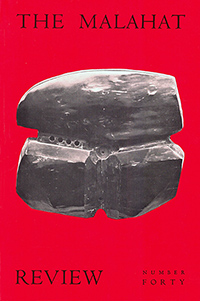