In the reviews section of Issue #39, the past and the present collide. Here G.V. Downes, a.k.a. Gwladys V. Downes, poet and critic, reviews four books, two of which are Susan Musgrave’s The Impstone and Dorothy Livesay’s Woman’s Eye. Take on the challenge of six degrees of separation, and quite quickly Livesay is linked to Musgrave through her recent editing of Force Field: 77 BC Women Poets (Mother Tongue Publishing, 2013) in which Livesay’s Women’s Eye: 12 B. C. Poets is recalled as the last book of women’s writing published in B.C. thirty-five years ago.

But the Malahat was not a journal that stuck to its home base and some of the content here is testament to its editor’s ability to pull the world in through writers whose names remain known; their writing celebrated. W. S. Graham (1918-1986) is one, as is Jayanta Mahapatra (1928- ), one of the most well-known Indian poets writing in English. Journal entries from David Gascoyne (1916-2001) are here, highlighting his time in Paris where he socialized with Gertrude Stein and other bohemian writers of the 1930s. There are also contributions here from authors who were well-known for a while, such as John Wain (1925-1994), a member of “The Movement” a group of post-war poets that included Philip Larkin. The Malahat republishes Wain’s lecture on Larkin in the pages of #39.

The images that assault the reader in issue #39 come from Jeronimo, whose full name is Jeronimo Pablo Gonzales Martin; and he is hard to track down. Robin Skelton provides a bio for Jeronimo, who was (or is) a Canadian writer and artists who immigrated to Canada from Spain. His art in these pages explores the Spanish Civil War in stark, black-on-white depictions of angry men and women in protests both violent and desperate. He is also a poet and many of his books are available on online, in Spanish.

Reading the past issues pulls down the thin veil of time. It reveals and reminds, it leaves a few questions and moments of recollection and delight when a familiar name appears, fades, and appears again. 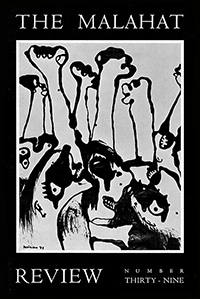