Published in April 1976, Issue 38 of The Malahat Review features an eclectic mix of primarily contemporary to-the-times writings. One notable exception is a translation of Les Fiancailles (The Betrothal), a poem written in 1908 by Apollinaire, an acknowledged leader of the literary avant garde. This poem is from his 1913 collection Alcools, and is dedicated to Picasso.

Poetry in general comprises half of the works in this issue, including selections in the Book Reviews section prepared by one of the issue’s assistant editors, well-known West Coast poet and historian Charles Lillard, who died in 1997, the year his final collection was shortlisted for the Governor General’s Award. Lillard reviews Daphne Marlatt’s Steveston, which, with photos by Robert Minden, is one of her most admired long poems. Marilyn Bowering, now a noted Canadian poet, novelist, and playwright, also provides a review.

Other works include a short story from Crossing the Border, a collection by Joyce Carol Oates, at the time already a repeat O. Henry Award winner and well into her prolific body of work. As well as translated contributions by Zoya Boguslavkaya, a widely-read Russian author, and Ana Maria Matute, recipient of Spain’s 2010 top literary award, who died in June 2014.

Finally, two rarities of special interest in this issue are the pre-publication inclusion of an excerpt of John Biram’s Teknosis, released two years later, subtitled as The Death of the World, and editor Robin Skelton’s bold example of edgy contemporary material in profiling the work of Camilo Kerrigan, at nineteen, a young artist with an impressive literary pedigree. Kerrigan’s work is expertly photographed in black and white by another of the issue’s assistant editors, William David Thomas, and appears on plates in the text as well as being featured on the cover. 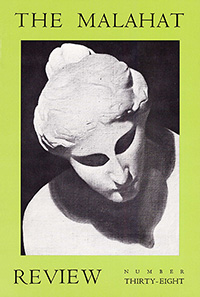