My house, built in 1927 and moved sometime in the 1970s to its current site, is still heated by oil and the furnace is ancient. When I had the furnace serviced last year, the repair guy said that if it were to give out, he could order me a new one that would be pretty much identical to the original because “they just work.”

Although I don’t want to make too much of a connection between my furnace and The Malahat Review, especially since I’ve used the word “ancient” and have invoked fossil fuels, there is something in the essence of it that is worth mentioning. Maybe Malahat is now solar powered, or it has a geothermal heat pump, or a flux capacitor (all of our online work could not have been imagined in 1979) but there is still something like that sturdy furnace at the centre of it. Despite the changes in the world over the past forty years, there is something comforting about looking back at a 1979 issue of Malahat to see that the essence of it—finding good writing and making it public—is as it always was. And, because it’s really just that simple, the magazine has an engine that could keep it going for decades.

This issue contains a moving short story by a young Guy Vanderhaeghe called “What I Learned from Caesar,” in which a son documents the decline of his Depression-era father. A salesman at one of the worst times in history to be a salesman, the father has to struggle with a major shift in his identity.

In 1979, Malahat’s subtitle was “An International Quarterly of Life and Letters,” and, in addition to poetry and fiction, published the occasional critical essay. In a place of prominence at the head of this issue is an essay by Roger Bowen titled “Native and Exile: The Poetry of Bernard Spencer.” Spencer was an almost important English poet. He was an editor as much as anything, of Oxford Poetry and Personal Landscape. He published only three collections of poetry in his lifetime (he was plagued by bad health and died at age fifty-four) but lived an interesting life in Greece, Egypt, and Italy.

Another aspect of the “Life and Letters” part of the subtitle was the inclusion of artworks in the magazine. The cover image is a woodcut by Naoko Matsubara and six more of her woodcuts appear in a portfolio in the centre of this issue.

Florence Gould (who, we learn in her bio note, was born in Montreal, studied at Sir George Williams, and sold antiques in New York) has her first (only?) publication here—a lovely and anxious-making shoplifting story called “The Blue Blouse.” 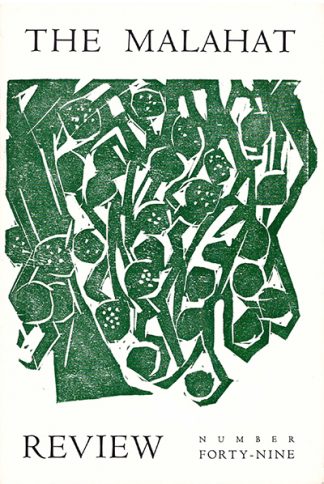