In this issue, editor Robin Skelton authors a short essay that precedes eleven black-and-white images by the Spanish artist Mariano Villalta (1927-1984), who also contributes the untitled cover art. Skelton describes how Villalta’s “paintings challenge with no definite images, but cause us to interpret them ourselves and consequently accuse ourselves.” That is to say, the poetry, fiction, and essays gathered here requisition our engagement as essential participants.

This issue’s poetry evokes the shifts and eddies that encompass experience, especially when it involves change. James Harrison’s “Sea Changes” and Joyce Nelson’s “Trying to Keep You Living” cut furrows into the heart of transformation, whether by “earthbound rites of love” or “six dozen sleeping pills washed down / with expensive gin.” In “The Skeena” by George Woodcock, the river carries indigenous people forward in time and also into memory. Translated from the French by Byron Leonard, Benjamin Peret’s (1899 – 1959) “Five Portraits” paints surrealist, poetic figures of his contemporaries, including Andre Breton (1896 – 1966), Max Ernst (1891 – 1976), and Paul Eluard (1895 – 1952). Barry Dempster’s “The Unexpected Sorrow of a Logical Man,” and Sharon Berg’s “When You Go to the Sage” round out the issue’s poetic offerings. Berg’s speaker travels up the mountain in search of answers to questions of want and need. In Dempster’s poem, the speaker doesn’t “understand nostalgia or / wading in what seems like / a harmless pool you’ve built yourself.” Indeed, “in blood and salt water” the logical man wrestles with emotion. In all these poems, the liquid bodies demand, the way nature does, a reader’s deep engagement.

Two notable short stories and two essays also surface here as invitations to a further exploration with the self. In Glendy Gall’s (1957 – 2013) “Train to Lausanne,” Melanie and Charles engage in philosophical foreplay, questioning Melanie’s yearning for perfection through her own narratives of other trips with other characters. Translated from the Persian by Mohammed Yadegari, “Fleshy Flowers” by Sadiq Chubak follows Murad and his “uncontrollable urge for drinking and smoking.” The story portrays an uneasy relationship between Murad and Jacob, a Jewish man who confronts him about a debt. While the problematic stereotypes bubble to the surface, the story leaves the reader searching for a deeper meaning and the significance of the flower tattoos on a woman’s buttocks. Ralph Gustafson’s (1909 – 1995) “Witness Poetry” and Diane Schoemperlen’s “The Role of the House in Canadian Fiction” are insightful essays. Schoemperlen argues for the deliberate presence of both figurative and physical representations of the house as a “useful approach to understanding the Canadian imagination and the art which it produces.” Interestingly, Gustafson’s treatise on the poet as witness to “the actual headlines of the day” suggests that “poetry is a religious procedure accomplished by secular exhalation.” 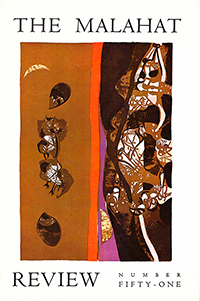