Issue 52 includes a cover and photos of “Closed and Open Wall Series” by Yves Trudeau, a prolific, public artist born in Montreal. Poetry figures prominently in this issue with works submitted by Reiko Tsukimura, Meena Alexander, Anne Szumigalski, Diana Keating, Naomi Rachel, and Donna Dunlop. The poets plumb the depths of their interpersonal experiences, at times bringing solitary observation into a public sphere and, conversely, re-imagining communal fables as something deeply personal.

Miyoko Goto’s (1898—1978) four Tanka Poems are translated by Tsukimura, who follows with her own set of twenty. Both works deal in the cycles of birth and death with precise images that linger past a season’s natural rhythms. Alexander suggests in “Rootedness” that a reader look closely at a sacred tree and the nest of cobras below. In “The Portrait of E,” Szumigalski’s voice creates new interpretations for the static portrait within the poem. Keating and Dunlop succeed Little Red Riding Hood and the Wolf in “Moondays” and “Wolf Print,” enacting the predator-and-prey relationship as transformative. “The Poem” by Naomi Rachel uses images of birds to “decipher a falling star from a jet” as her short lines and stanzas battle with language’s ephemerality.

There is something mysterious lingering behind the lines of issue 52 that includes the reader in the old stories, as well as the seasoned tales that always seem to come back around. The poets grab on to these apparitions and shed new light on collective emotion and experience. 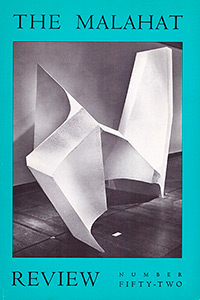