Editor Robin Skelton, in his prefatory Comment, bemoans the demise of the journal Canadian Literature in Translation, forced to shut down due to lack of support from The Canada Council. Skelton’s view is that the death of any magazine is to be mourned, but one that served to acquaint Canadians with international writing even more so. “If we isolate ourselves intellectually, ignoring the literature and thought of other countries, including the United States, we will exchange a possible Parthenon for a whinging Parish Pump.”

As in many Malahats of this era, #53 contains work by “foreigners,” including Americans Elizabeth Bartlett, Adrian Frazier, and Harold Wright, as well as four poems by the Slovenian poet Edvard Kocbek (1904 – 1981) translated from the Slovak by Herbert Kuhner and Ina Jun Broda.

Susan Musgrave, very much Canadian, having moved to British Columbia with her parents at the age of three, is interviewed here by John Pearce. Musgrave was first published in The Malahat Review when she was just sixteen. Her first book, Songs of the Sea-Witch, was published in 1970 when she was nineteen. In the ten years between that title and this interview, another nine books had appeared. This is an insightful glimpse into the formative years and preoccupations of a writer whose newest works we continue to anticipate and enjoy. Other Canadian poets represented include Kim Maltman, Leona Gom, and Jane Urquhart, although the latter is better known today as a novelist. Another contributor, Theresa Kishkan, also began her career as a poet, but has found much success as a novelist and essayist. The lovely semi-autobiographical “Stephen,” set on a small island off the west coast of Ireland, would later form part of the novella Inishbream, published in a gorgeous limited-edition by Barbarian Press and as a trade edition in 2001 by Goose Lane Editions. Kishkan captures the rhythms and lilt of Irish speech and the harsh beauty of the land.

Following Kishkan’s story, it is fitting to close out the issue with Adrian Frazier’s “The Sincerity of Patrick Kavanagh,” a critical study of the Irish poet (1904 – 1967). The essay considers how Irish nationalism was actually a product of colonialism, the result of a resultant crisis of identity. “The significance of Patrick Kavanagh…issues in part from the fact that he was not separated from the Irish past by birth, education, religion, or manners. He was not a student of Irishness, an aspirant to Irishness, or a defender of Irishness; he was an incorporation of the people.” 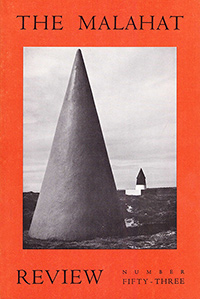