Any writer knows that it can be discouraging to have one’s work met with relative silence—few or no reviews and poor sales. But one of the wonderful things about the written word is the ability to last through the ages, and it is that quality that should hearten us in our dark hours.

I felt that encouragement reading though this issue of Malahat from 1980. The first story is a piece by the Dutch writer Jan Hendrik Frederik Grönloh (1882-1961), who used the pen name “Nescio.” “The Mooch” is a quietly brilliant story in a style somewhere between Italo Calvino and John Berger and it transported me to another time and place in a delightful way. The story was written in 1911 and a quick Internet search leads me to think that others who have stumbled on Nescio’s work and who have not been aware of him previously, are quickly converted. For me, this is the magic of literature—each new reader’s “discovery” of an older piece of writing is a resurrection in which the story (and perhaps the writer) lives again. Clouds part, the light shines down. Converts like me look no further; another story of his was published in translation in Malahat’s issue 40.

As if to say, “and now for something completely different,” also in this issue is Robert Kroetsch’s “Sketches of a Lemon”—a grandly self-aware brick in the history of CanLit which, as well as being a fundamental text for students of Canadian Poetry, contains in section 10 a recipe I have used with good success to heal both colds and hangovers:

Kroetsch’s book The Sad Phoenician is reviewed in this issue and he is compared with Francois Rabelais and James Joyce as one of the new “lords of free-wheeling exuberance.” The review itself is only a few lines long, as are all of the fifty reviews in this issue. Given the enormous number of books published in Canada now, compared with 1980, all those (admittedly slight) reviews made me wonder whether a very brief review might be preferable to no review at all for most writers today.

Issue 54 is rich in poetry, ranging from the ancient (“Selections from the Bijak of Kabir”) to the contemporary, so I will let these lines from Roo Borson’s “Now and Again” on page 61 leave us with some thoughts about the lasting qualities of literature:

Now and again it seems like it’s time
to pass the baton and let somebody else
run their little way into the future. 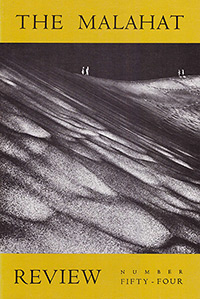