In his opening commentary, Robin Skelton draws attention to Thomas Kinsella as one writer whose skill as a poet, translator, editor, and publisher has “altered the arrangement of the world and the world’s time.” Issue 55 offers readers the opportunity to explore a contemporary creative landscape in which the translation of ideas, images, emotions and language merge to provide a wonderful international sampling of how modern literary and visual artists from Canada, Great Britain, the USA, Italy, Sweden, and the Czech Republic interpret their worlds.

The cover photograph, “Atrani,” by Italian-born Canadian Pasquale Verdicchio, invites readers to discover a special corner of Italy’s Amalfi Coast. A fascinating collection of eight black and white photographs from his series showcase roads and houses dating back to Roman times. In doing so, he offers a glimpse of spaces “created within an adaptive architecture, reflecting the human character of the town.”

John Montague, one of the world’s best known Irish contemporary poets, opens the issue with “Leap,” a poem that encourages readers to “leap backwards in time, / headstrong as a young man, / against all warning” and explore “details amplified by distance.”

Fans of Japanese Noh theatre will enjoy a series of poems inspired by one of the oldest theatrical forms in the world. In a piece titled “Poems From The Noh” (taken from the Pound / Fenollosa translation of Noh plays), American writer Elizabeth Ayres reveals the process she undertook to craft such poetic gems.

Works in translation include a short story titled “Natural Selection” by Swedish proletarian writer Jan Fridegård (1897-1968) and translated by Robert E. Bjork as well as “Three Poems” by Italian poet Carlo Biadene (translated by the late Peter Russell.) Of particular note is “Four Poems” by one of the most internationally recognized Czech poets, Miroslav Holub (1923-1998) and translated by Dana Ha’bova’ and Stuart Friebert. A research immunologist by day, Holub wrote poems that were heavily influenced by his scientific endeavours.

Finally, Terry Gould, an American-turned-Canadian investigative journalist and recipient of over fifty awards and honours including The J. W. Dafoe Book Prize (2014) indulges his fascination with social issues in “So It’s My Fault?” Readers will delight in this intimate, persuasive, first-person account of life by an elderly Jewish woman whose unforgettable voice leaps from the pages. Her defiant tone, unfiltered comments on human nature, ironic tendencies and great humour make for an unforgettable protagonist and brilliant tale of family drama. 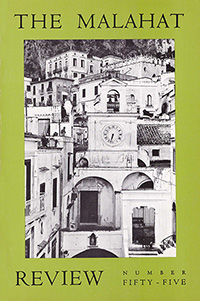