Editor Robin Skelton begins issue number fifty-six with an intriguing and quite hilarious Comment about a “terrible new plague” that has affected readers throughout North America. It is defined by symptoms of wrist pain, eyestrain, and insomnia. This traumatic experience is a result of the quality of a book’s binding combined with a narrow inner margin to create such a sheer physical burden on the reader that it prevents one from falling asleep in bed. He claims that a book demanding the use of both hands to hold it open deprives the reader of the simple pleasure of having a drink while reading. He further inquires as to whether the breweries might promote this campaign to end the strife—a movement he calls Reader’s Easy Accessibility Degree or READ.

It can be said that issue number fifty-six is diverse enough to satisfy the palate of a reader from any generation. As is the case with all Malahats, this issue presents a pleasant mixture of poetry, artwork, and short stories. A particular poem that stands out is “For The Sea Turtles,” one of three by American poet Frannie Lindsay (1949-present). It is a brief poem that expresses the beauty of life’s journey and the cruelness of its end. This poet reveals her ability to describe with eloquence the sea turtles’ struggle for survival.

An eye catcher among the few pages of artwork is an etching entitled Go Back Up To The Zoological Gardens, a thoughtful study of man’s connection to wildlife by the esteemed artist Jack Coughlin (1932-present), whose selected Irish portraits appeared in the April 1972 Malahat. 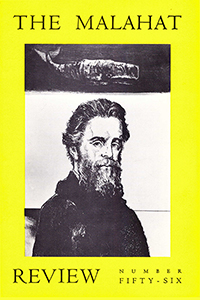