A work by British artist and designer Sir Edward Burne-Jones (1833-1898) graces the cover of Issue 57 in Pre-Raphaelite splendour. Indeed, it offers up a clue as to the contents of this edition. Burne-Jones was a member of the Pre-Raphaelite Brotherhood, Aesthetic Movement, and the Arts and Crafts Movement. His compositions, rich in medieval and mythical imagery, were eventually overshadowed by unrelenting trends in modern art only to be rediscovered in the mid-1970s.

Fans of Irish literature will delve into David R. Clark’s essay, “Yeats’ Dragons: The Sources of “Michael Robartes and the Dancer” and “Her Triumph” as shown in the manuscripts.” Clark suggests that Yeats clearly had a painting in mind when he wrote these poems. He painstakingly excavates Yeats’ manuscripts in search of clues and presents his hypothesis that the source was a painting titled “The Doom Fulfilled” (the same work pictured on the cover of this issue) by none other than Burne-Jones. Ten black and white plates of paintings by such “greats” as Blake, Titian, Ingres, and Tintoretto are also presented as possible sources of inspiration. Short story enthusiasts will devour “The Boy and Annharrod” (Mike McCadden, Canada), “Tinker, Tailor” (Carolyn Ricapito, USA) and “Old Man” (Jeanette Erlbaum Goldsmith, USA).

A wonderful selection of poems round out the issue, including “The Marvellous Mistress” by Humber College School of Creative Writing founder Greg Gatenby (Canada) and “The Stone Orchard” by Joyce Carol Oates (USA), prolific writer of multiple genres and recipient of the O. Henry Award (1967 and 1973) and National Humanities Medal (2010). Of particular note, however, is a series of poems written by Greek poet Odyesseus Elytis (1911-1996), translated by Edmund Keeley (USA) and the late Philip Sherrard (1922-1995, England). Elytis was highly influential within the artistic realm of romantic modernism. Born into a family of soap manufacturers, the poet went on to receive the Nobel Prize for Literature in 1979. This series of exquisite poems highlights Elytis’ love of beauty, sensuality, freedom, hope and Greece itself. 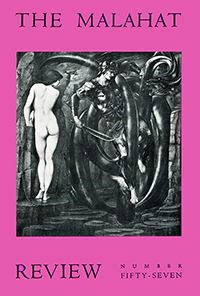