In his editorial, Robin Skelton remembers John Glassco (1909–1981)—“among the finest writers of our time”—who’d died on January 29, 1981, two months before this issue was published. Skelton laments how the national press, when reporting the death of this significant Canadian author, largely focuses on his sometimes infamous erotic writings at the expense of his contributions as a translator, memoir (he is best known for Memoirs of Montparnasse, despite its inaccuracies, considered by many to be a finer evocation of the “Lost Generation” than Hemingway’s A Movable Feast) and poet (he won the Governor General’s Award in 1971 for a slim, 34-poems-long Selected Poems). The theme of the misunderstood author—or artist—recurs at least once more in this issue. Juliet Ray, the widow of the celebrated American modernist, Man Ray, remarks when interviewed by Mark Gomes that even his champions held his gifts as a photographer in higher estimation than those as a painter, which he himself considered to be more notable. As Juliet explains, he took photographs for money (very often of famous people—he was a progenitor of today’s celebrity photographer) while he painted for love. The interview is complemented by a portfolio of twelve May Ray drawings (with a thirteenth on the cover), all photographed while Juliet held them up, her hands and/or fingers visible. The beauty of her hands is dwelt on by Mark Gomes in his prefatory remarks.

Timothy Findley is the subject of the issue’s second interview. In 1981, He had a mere three novels, including his Governor General’s Award-winning The Wars, and two plays to his name. At the time of his death in 2002, his bibliography had extended him to 24 substantial titles. Alison Summer plumbs preoccupations that would concern for the rest of his career. As he explains, they seldom deviated from how people use one another at the micro (interpersonal) and macro (international conflicts) levels. He likes to counterpoint themes of destruction (the First World War) with those of regeneration (the tending of a garden). His fourth novel, Famous Last Words, about the rise of Nazism and Nazi sympathies in Allied countries, would be published in the fall of 1981.

Findley may be the most highly regarded Canadian author in the issue at the time of its publication, but other important Canadian writers appear alongside him, but very early in their careers. The issue collects early poems by Jane Urquhart (she had yet to publish False Shovels, her first book, [and first book of poems], which appeared under the imprint of Victoria’s Press Porepic, founded by the late David Godfrey), Mark Abley (now the author of five books of poems, several nonfiction works on English, the world’s threatened languages, and a biography of Duncan Campbell Scott), Pier Gorgio di Cicco, and Richard Lemm. Appearing next to the work of these now celebrated, even canonical figures is a single poem by R. A. D. Ford, the centenary of whose birth fell on January 8, 2015. John Pass makes his second appearance in The Malahat Review in a single year (he is also found in Summer 1980) with selections from “An Arbitrary Dictionary”; each of the ten poems’ titles were chosen randomly from the OED, then mediated upon until he had found a way to write about it. Here’s a taste from “Consistence”: “The yogurt thickens / in the warm oven // as does this / domestic bliss // and boredom / we, of all lovers / (as all lovers) // lust and learn for / least.”

Typical of the Malahat under Skelton, sixteen of the twenty-eight contributors are from other countries. I can only marvel at how consistently he marshalled such substantial, interesting, and “far-flung” international content issue after issue. #58 features translations from the Chinese, Spanish, and Nepalese alongside poetry, fiction, and nonfiction by eight American and British-based writers. An article on the now celebrated novels of British fantasist Mervyn Peake stands as evidence to Skelton’s long-standing commitment to scholarship. The issue closes with his standard compendium of “Brief Reviews,”—a feature I relished reading as a student; in this instance he provides thumbnail sketches of 51 books of art history, poetry, fiction, biography and memoir, crime fiction, and criticism. I would not be surprised to learn that many librarians read these usually to-the-point encapsulations with relish and let them guide their buying decisions. 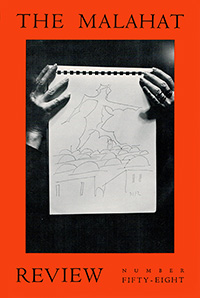