It’s easy to approach this 1981 issue of the Malahat Review as if we’re all enthusiastic historians of English literature, internationally and in the CanLit context. Robin Skelton demands our attention as fellow students by including eight iterative drafts and edits of Ezra Pound’s short poem “From Syria,” a translation that Pound produced from Latin and Provencal. Nor is this the only place that Skelton, as the editor of the Malahat, draws attention to translation as a requirement for a cosmopolitan approach, as he also includes a then-new translation by Anthony Kerrigan of a brief segment of José Ortega y Gassett’s Rebellion of the Masses to begin the publication.

Even poems by CanLit-identified poets Ann York, Lala Koehn and Mary DiMichelle show the traces of distances travelled – not because all carry into their verse some sign of these poets’ childhoods abroad, but because their poems so often call attention to the gaps between places and the various types of baggage brought along from old homes, old haunts.

Of the short fiction in this issue, Kenneth Radu and Matt Cohen make strong contributions, but it seems best to highlight the story written by Ontario-born Douglas Glover, who takes his CanLit background abroad both literally and figuratively to study and challenge the traditions of classical literature. His contribution begins as a railway encounter between an aging, comfortable abbot and a tramp, a set piece that exceeds the expectations inherited from both canon and context several times over – providing a brief but convincing case for the value of homegrown talent in a context of longer ages and wider places. 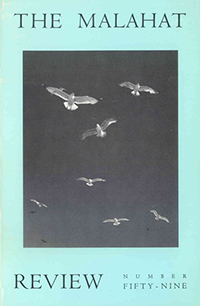