In this issue Robin Skelton’s wish from West Coast Renaissance II is granted. Thirteen stories from Franz Boas’ collection of Indian Folktales from British Columbia are printed in a literary magazine for the first time. Bill Ellis, once a publisher and distributer of native artwork, writes a short essay on “The Rebirth of Haida Arts and Crafts.” Famous carver Bill Reid has four photographs entitled The Progress of Carving included in the issue. In the editor’s comment, Charles Lillard details the history of the name “West Coast” and how the history of names and places tie in to the Canadian art and literature that developed along the west coast. Lillard, who credited George Woodcock as “the man responsible for the present renaissance,” in the first renaissance issue (#45) closes the issue with an autobiographical essay by Woodcock discussing how a “cosmopolitan consciousness can live and create on the frontier without succumbing to frontier mentality.”  In this issue: “She Keeps the Dance Turning Like the Earth,” a work of short fiction by Washington author Duane Niatum followed by four of Niatum’s poems, “Centennial Year for the Spirits,” a poem by Sister Goodwin, “Song of the Northern Lights” and “Ohalet,” two poems by Tim McNulty, and many other poems and sagas written either by First Nations authors or visitors who became interested in writing about native culture. 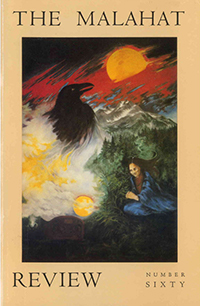