If you’re interested in reading authors you admire at earlier stages of their careers, this issue provides you with ample opportunity. It opens with Carol Shields’ “Love So Fleeting: Love So Fine.” With two novels thus far to her credit, the author of The Stone Diaries (winner of a Governor General’s Award and a Pulitzer Prize in 1993) follows a husband of thirty around Winnipeg who, after noticing a sign in an orthopedic shoe store’s window that announces “Wendy Is Back!” continues walking while daydreaming about who Wendy is. He falls in love with “his Wendy,” then drifts on to reminisce about other chanced-upon,  “invented” women on whom he’s lavished “love” with like gusto. There are also fine stories by Janice Kulyk Keefer, Linda Spalding (winner of the 2012 Governor General’s Literary Award for Fiction for The Purchase), and Cynthia Holz.

bpNichol’s “In the Plunket Hotel,” from Book VI of his multiple-book-length poem, The Martyrology, recounts his visit to Plunket, Saskatchewan, where his grandparents once ran the local hotel and where his mother was born in the 1930s (“in the Plunket Hotel / we became what we really are, / transient, temporal, i’s in motion”). Nichol’s black-and-white photographs of the town nostalgically illustrate his poem.

Barbara Caruso, one of Nichol’s collaborators in Toronto and the publisher of Seripress (publisher of limited-edition books by him and his peers in the performance-poetry ensemble, The Four Horseman), illustrates Edmonton poet Douglas Barber’s “An Alphabet,” with the twenty-six letters in individual child-like blocks scattered through his text. This loosely abecedarian and ekphrastic poem is an homage to Caruso’s creative method. Her finely crosshatched drawing of mostly unlettered blocks, arranged five by five with a single block dangling, appears on the cover.

The October 1983 issue closes with a section of book reviews. Most notably, associate editor Stephen Scobie, who won the Governor General’s Literary Award for Poetry in 1980 for McAlmon’s Chinese Opera, contributes a twelve-page essay review of fifteen works of postmodernist criticism by or about Umberto Eco and Jacques Derrida, among others. 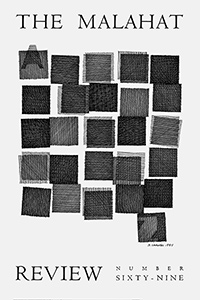