The 70th issue of The Malahat  is dedicated to John Metcalf (1938-  ), introduced by Constance Rooke as a stylist and a polemicist, a writer of “all three fictional sizes—the story, the novella, and the novel”, as well as an essayist, editor, and anthologist. She raves about his humour, his precision, and his skill. Rooke’s editorial comment is followed by an equally complimentary introduction from Alice Munro (1931-  ), queen of the short story and recipient of multiple awards, including the Nobel Prize in Literature. Needless to say, her praise of a fellow writer is not to be taken lightly. She tells of the “literary friendship” she began with Metcalf through letters, and the “remarkable respect” she has for his opinion on her writing. She professes that Metcalf has the ability to detect “where all the soft spots are, where the words are pasted over the cracks…maybe even mark the place where a loss of faith hit you, not momentously like an avalanche but drearily like a dry trickle of clods and stones.”

Much of the issue is filled by Metcalf’s lengthy short story “Travelling Northward,” in which his gift for hilarity becomes entirely clear from the first paragraph, in which he describes a morning in the life of disgruntled writer Robert Forde, who “felt, every morning, as if nerve endings all over his body were exposed and that the world was brushing against them.” There is a decidedly English flavour to the comedy, which blends interestingly with a staunchly Canadian backdrop. The story’s author is, in fact, originally English, having come to Canada in 1962 at twenty-four years old. It’s clear that Metcalf puts much of his own experience into his writing.

The reader is able to experience Metcalf’s incredible versatility for themselves, as the next piece is nonfiction: “Paintings About Painting: Notes Towards an Essay on Tony Calzetta.” Several of Calzetta’s paintings are printed in the magazine preceding the essay — they are minimalist, organic, decisively outlined, often featuring water-like elements. Metcalf paints his word portrait of this fascinating Canadian painter. Calzetta is the poster child of dream chasing. Originally an accountant, briefly a labourer and a drapery installer, Calzetta was dissatisfied with his life until, aged twenty-six, he decided to go to art school. In September 1971 he appeared at the University of Windsor with his portfolio, which he described as “a ratty piece of cardboard in which I’d got sandwiched some little drawings I’d done when I was about ten years old, a few watercolours, and a copy of a brassiere commercial from a magazine.” Metcalf tells the rest of Calzetta’s story and his journey as a painter. Fittingly, this issue’s cover photo is of Metcalf standing pensively in front of an expansive Calzetta canvas.

Throughout the remainder of issue 70, we are granted thoughtful essays on Metcalf’s works by Simone Vauthier, Keith Garebian (1943-  ), George Woodcock (1912-1995), and Constance Rooke (1942-2008). These are smart reviewers, with Vauthier described as “perhaps the most distinguished European critic of contemporary fiction,” Woodcock having founded Canadian Literature, and Garebian and editor Rooke having been published in multiple journals of Canadian literary criticism. Their analyses are focused and deeply invested in the subject matter — Metcalf’s extraordinary prose is compelling to the leisure reader and to the critic alike. 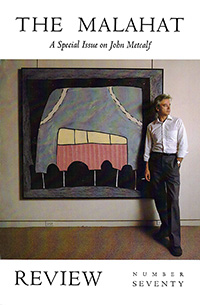